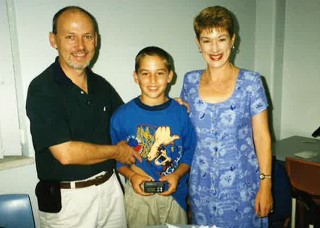 February 22, 1999 will forever be etched into the memory of Thomas Johns as it marks the day he became the first child in Australia to be fitted with an insulin pump — and the day the then 10-year-old said goodbye to insulin needles once and for all.

Fast forward 21 years, and Thomas, now 32, is on to his eighth pump and forever grateful for how pump therapy has changed his life.

Thomas, who was diagnosed with type 1 diabetes just shy of his sixth birthday, said his parents wanted him to have good control over his condition, especially as his mother, a nurse, had nursed people with diabetes-related complications.

“Mum had come across an article about an adult who was on an insulin pump and decided that this was the answer to better diabetes control,” Thomas said.

“At our next appointment at Princess Margaret Hospital (PMH), she told Dr Tim Jones, who was my endocrinologist at the time, that she wanted me to be put on a pump. Dr Jones had recently returned from a study trip to the US and saw this as a great opportunity to get children on pumps in Australia.”

Getting Thomas on a pump was no mean feat. A MiniMed (now Medtronic) representative flew over to Perth from Sydney for a week to educate Thomas, his family, and staff.

“I was in hospital for a week to learn how to use the pump, how to do insertions and to be a guinea pig so the doctors and nurses learnt to use it,” he said.

Thomas, who gave a speech in Parliament House as a JDRF ambassador when he was 15, said he had good diabetes control prior to the pump but that it got even better on the pump.

“The flexibility it gave me was unbelievable,” he said.

“Good control has meant I could play rugby, basketball, swimming, and do army cadets, usually activities that send your blood glucose levels bananas.”

Thomas’ mum Belinda Johns said they pursued a pump for their son because they believed he would have better blood glucose control, a better lifestyle and be free of needles.

“He was having four injections per day and was basically eating to match his insulin injections instead of the other way around,” she said.

“While he was compliant and very courageous for his age, it was a nightmare for him. His life was totally controlled by his diabetes and it was difficult to maintain good blood glucose levels.”

Belinda said as there was no established paediatric pump protocol, establishing good diabetes control on the pump took some time.

“Disturbed nights and unstable blood glucose did not disappear straight away, and everyone was on a steep learning curve,” she said.

“The relief from constant needles was instant and we loved the fact that Thomas was now able to have more flexibility and variety with his diet.

“As a child, he was now less constrained by his diabetes and able to participate more easily in sport and social activities. We were excited and relieved to know that he was using cutting-edge technology and everything possible was being done to normalise his life and keep him healthy.

“We believe insulin pump therapy has given Thomas the healthy and amazing life he has today.”

While more than half of all children with type 1 diabetes are currently on pump therapy, the decision to put Thomas on a pump in the late 1990s was controversial, according to Children’s Diabetes Centre co-director Professor Jones.

Professor Jones said he and Professor Liz Davis, co-director of the Children’s Diabetes Centre and Head of Perth Children’s Hospital’s Endocrinology and Diabetes department, had a Telethon Kids Institute research program grant with a key aim of reducing hypoglycaemia at the time Thomas was fitted with a pump. Insulin pump therapy was effective at reducing hypo rates, he said.

“Pumps were not widely used in Australia and never in children because clinicians tend to be conservative about new technologies,” Professor Jones said.

“Thomas’ story illustrates that diabetes researchers and clinicians in Perth have always been innovative, world-leading and prepared to lead change for the benefit of children and families living with type 1 diabetes.”

Professor Jones said since being on pump therapy, Thomas had avoided more than 40,000 insulin injections. 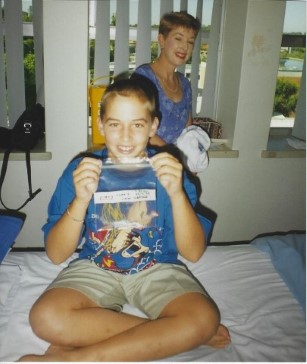 Above left: Thomas with his last insulin needle before being fitted with the pump at Princess Margaret Hospital. Right: A recent photo of Thomas.

Top: Thomas and his new pump, pictured with his dad Stephen and mum Belinda.