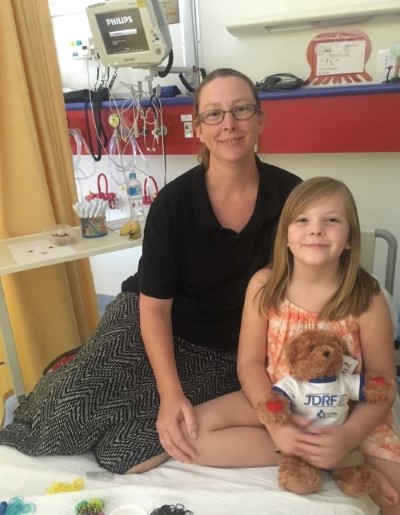 A diabetes diagnosis is a shock at any time but spare a thought for the Rusten family who literally jumped on a plane to Perth from Kununurra within an hour of finding out daughter Montanna might have the condition.

Mum Natalie said there was no time to process what was happening as they needed to board the Royal Flying Doctor Service jet, which coincidentally, was headed to town.

“We live 20km out of town so I raced home, packed a few things and we got on the plane,” she said.

Once in Perth, seven-year-old Montanna was placed in the Intensive Care Unit at Princess Margaret Hospital (PMH) to address her high blood glucose levels with high ketones, a condition known as diabetic ketoacidosis (DKA).

DKA happens when a person does not have enough insulin in their body to keep their sugar level in range. This lack of insulin causes ketones to build up and there is a loss of fluids and salts from the body.

Husband Steve flew down a few days later and ever since, the couple have been getting up to speed on diabetes care.

“We had all had the flu for a few weeks but when she started vomiting, had difficulty breathing and complaining of chest pain, I knew something was wrong so we rushed her to hospital (Kununurra),” Natalie, who has a nursing background, said.

“She had lost some weight but she’d also had a massive growth spurt lately so I put it down to that – we never suspected diabetes.”

Natalie said Montanna, who is in Year 2, had had an up and down week in hospital, initially ‘hating the world’ and being quite scared and upset, to now absorbing what information she could.

“She is more understanding, asking questions and absorbing what she can,” she said.

Professor Liz Davis, co-director of the Children’s Diabetes Centre based at Telethon Kids Institute and endocrinologist at PMH, said PMH’s diabetes clinic had experienced a huge spike in the number of kids being diagnosed with Type 1 Diabetes over the past three months.

“T1D is a serious long-term illness and for reasons we don't yet understand, the incidence is increasing,” Professor Davis said.

“Currently, close to a third of children diagnosed with T1D present with the serious condition of ketoacidosis and require ICU treatment.

“This serious complication can be avoided by early recognition of symptoms – increased drinking and passing of urine, marked weight loss — by families and health care professionals.”

Professor Davis said most families who have a child diagnosed with T1D were not aware that children could get the condition.

“It is a serious condition that impacts life 24-hours-a-day and requires attention to checking blood glucose levels, and up to four injections of insulin a day to stay safe,” she said.

“There are extra challenges living in the country with a child with T1D as specialist care is not available locally, and extra training will be needed for teachers and carers.

“PMH provides 24-hour health care support to families to assist with the challenges of diabetes care.”

Researchers at the Children’s Diabetes Centre are working hard to improve the lives of children with T1D through clinical trials and research studies.