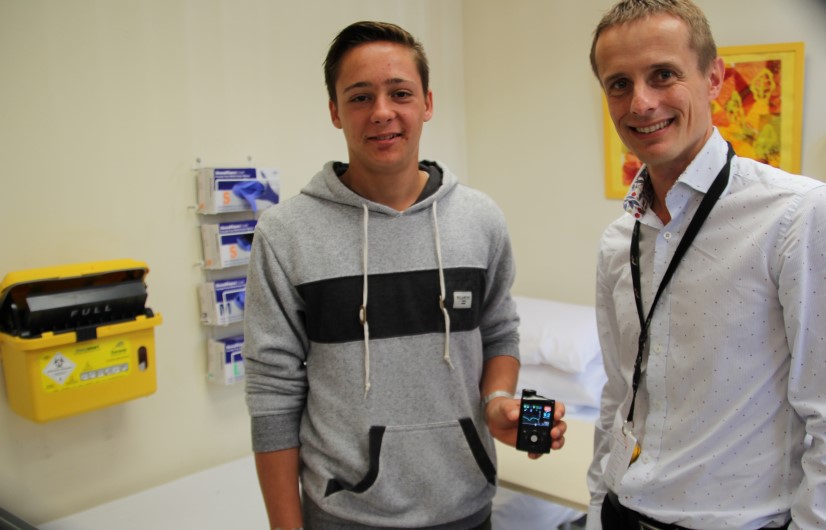 The 16-year-old Mazenod College boarder, from Kulin, is assisting in a national trial which will test the use of an automated insulin delivery system to see if it is better at optimising blood glucose levels than standard therapy.

The Hybrid Closed-Loop Outpatient Trial, which is still recruiting, will include 160 participants aged 12 to 25 and 120 adults aged 26 to 65 years.

Professor Jones said researchers wanted to understand how hybrid closed-loop systems affected the quality of life of Type 1 diabetics, in addition to its potential savings to the healthcare system.

“The hybrid closed-loop system consists of an insulin pump, sensor with transmitter attached and a maths program (an algorithm) within the pump that automatically works out how much insulin is needed and is adjusted every five minutes,” Professor Jones said.

“This study will tell us if using an artificial pancreas is better than either insulin injections or normal insulin pump therapy at keeping blood glucose levels within the normal range.

“Researchers will also explore how this technology affects how people feel about managing diabetes, specifically through improving their blood glucose levels, reducing diabetes complications and making treatment easier — which all goes towards reducing the burden of diabetes.”

The Hybrid Closed-Loop Outpatient Trial is a multi-centre study involving a number of Australian hospitals, and is funded by the Type 1 Diabetes Clinical Research Network, an innovative clinical research program led by JDRF Australia and funded by a Special Research Initiative through the Australian Research Council.

Are you hypo unaware?

A part of the Hybrid Closed-Loop Outpatient Trial will examine if an artificial pancreas can be used to treat hypoglycaemia (low blood glucose) unawareness.

This occurs when the body cannot detect dangerously low blood glucose levels and can affect one in five people living with Type 1 Diabetes.

Study lead Dr Marie-Anne Burckhardt, from Perth Children's Hospital, said researchers were hoping to recruit people aged 12 to 55 years who were already on an insulin pump and who have difficulty detecting when they were having a hypo.

“We already know that by avoiding hypos for several weeks we can improve hypoglycaemic awareness but this often means running the blood glucose levels quite high for a while,” Dr Burckhardt said.

“We want to test the use of a hybrid closed-loop insulin delivery system, which has been shown to cause less hypos but without running blood glucose levels high and see if the awareness improves.”