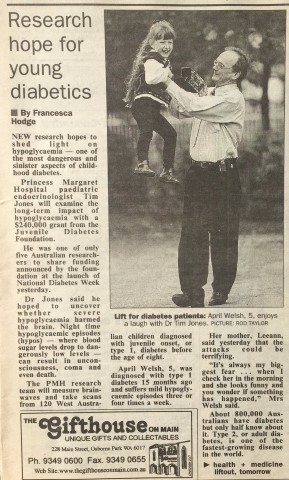 It’s hard to believe that more than 20 years has passed since five-year-old April Welsh was pictured with Professor Tim Jones in a story about new type 1 diabetes research in The West Australian.

Plenty has changed but one constant remains — Professor Jones still works for WA’s only paediatric diabetes service, which celebrated its 50th year of operation last year.

The diabetic service at Princess Margaret Hospital was established by Margaret (Pat) Ryan in 1968 and moved to Perth Children’s Hospital (PCH) earlier this year. It has grown from just four patients to nearly 1100 over that period.

Professor Jones, a paediatric endocrinologist at PCH and co-director of the Children’s Diabetes Centre at Telethon Kids Institute, joined the diabetes service as a trainee 32 years ago.

He said the multidisciplinary service was considered ground-breaking when it first opened.

“Pat could see that patients with type 1 diabetes needed specialist care so she got together a dietitian, nurse and endocrinologist (Pat) and started the service,” he said.

April recalled being sick a lot when she was a child.

“Mum often says it was like I had lost my spark when I was diagnosed with type 1 diabetes,” she said.

“I didn’t have the same enthusiasm as other kids…. until this picture! The day I started on an insulin pump, completely changed my life.” 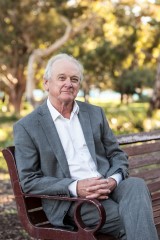 April said the biggest change over the past 20 years had been the rapid advances in diabetes technology.

“Within my 'short' 20 years of living with type 1 diabetes I’ve transitioned from a routine of multiple injections a day, to an insulin pump and now 24-hour, seven days a week continuous glucose monitoring with alerts and alarms to tell me what is going on,” April said.

“The amount of data and information that we have access to is huge compared to 20 years ago. “When you think about it, a fingerpick really was just a stab in the dark with no information about what has happened or what is about to happen. We are now able to have a more proactive approach to managing our diabetes rather than a reactive approach.”

“Things have changed hugely. Now we have more technology, a lot more understanding of how diabetes works and we get a lot better outcomes but we still have a long way to go.

“Type 1 diabetes is still a stressful disease and it places a huge burden on families.”

April looked forward to what the next 20 years would bring to diabetes research.

“I strongly believe that the advances in technology and breakthroughs in research will allow us to live in a world where diabetes can be managed without intense intervention,” she said.

Professor Jones believed technology was going to make the biggest difference to people living with type 1 diabetes over the next 20 years.

“I think the hybrid closed loop system (‘artificial pancreas’) will be a routine standard of care within the next few years,” he said.

“You’d hope that if the same rate of change occurs in the next 20 years then things will be a lot easier on patients and their families.”