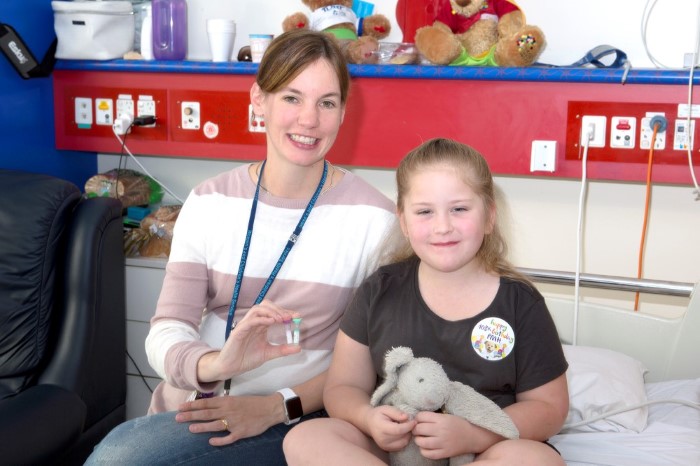 Six-year-old Kayla Hesketh is the first patient recruited to a new in-patient study being carried out by the Children’s Diabetes Centre in collaboration with the University Children’s Hospital Basel in Switzerland.

Kayla was eligible for the CoDiab study because she was admitted to hospital with Type 1 Diabetes and high blood glucose levels with high ketones — also known as diabetic ketoacidosis (DKA).

Children’s Diabetes Centre’s Dr Marie-Anne Burckhardt said the aim of the study is to find out how copeptin — a chemical messenger (hormone) — and other hormone levels changed during fluid treatment in DKA.

“Diabetic ketoacidosis happens when a person does not have enough insulin in their body to keep their sugar level in range. This lack of insulin causes ketones to build up and there is a loss of fluids and salts from the body,” she said.

“We want to see if copeptin can help us pinpoint those who are at more risk of complications from DKA so we can step in and deal with these problems before the body shows outward signs of them.”

Kayla’s father, Joe, said the family were surprised when their daughter was diagnosed with diabetes.

“She had some weight loss in the couple of weeks before the official diagnosis but showed no other symptoms,” he said.

“She did not drink more water and the only reason we took her to the doctor was due to her lack of appetite and complaining of having intermittent stomach cramps.

“We never suspected diabetes so we decided to take part in the study to hopefully give more knowledge and understanding to those affected by this disease.”