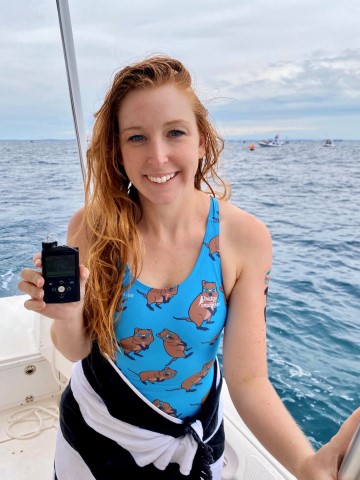 April Welsh loves a challenge. Diagnosed with type 1 diabetes just before turning four, the 26-year-old was the first female with diabetes to race in the Formula Vee (open wheel, single seater motor racing), and recently she was part of a four-person team that conquered the Rottnest Channel 19.7km open water swim in just under 7.5 hours.

Amazingly, April swam with the 670G Medtronic insulin pump attached, clipped to the top of her bathers for the entire swim.

“I did lots of training to prepare for the swim, not only swimming but also testing exactly how my blood glucose levels were behaving before, during and after swimming,” April said.

“We quickly found that my blood glucose levels would drop more than a whole millimole after 10 minutes of swimming.

“The team had decided that we would complete 10-minute rotations each on the day of the swim and so this is what I applied to my training.

“I would test my BGLs, swim for 10 minutes, get out for half an hour, test BGLs, eat something but only bolus for half the carbohydrates and repeat. This is the same method we applied on the day of the swim.”

April said something that was important was establishing what food to eat and how much throughout the day.

“I didn’t want to eat anything that was too heavy, sit in my stomach and make me feel unwell but after advice from a dietitian, we established 30-60g of carbs every hour would be an ideal target to keep my energy levels and blood glucose levels up,” she said.

April managed to keep her blood sugar levels between 4 – 10 for the entire day!

On the day of the swim, April’s diabetes management included:

We can’t wait to hear what April’s next challenge is!